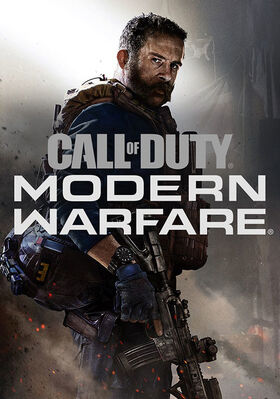 The game cover for Call of Duty: Modern Warfare.

The title was the featured game of the 2020 Season, and was the game on which the Call of Duty League debuted. This was the second and last title to feature a 5v5 player count. Matches were contested in best of 5 series with Hardpoint, Domination, and Search and Destroy being the three game modes. The series layout was HP/S&D/DOM/HP/S&D.

With the debut of the Call of Duty League, new Codcaster features were implemented including integration of team logos and player pictures into the overlay and team uniform skin overlays for each player. The observing team also introduced third person observing with alternate angles to show the action. Domination returned as a game mode for the first time since Ghosts. A pause feature was implemented on LAN but was never added to the online servers.

The Call of Duty League debuted on January 24, 2020, in Minneapolis, Minnesota, United States, with Launch Weekend. Teams competed in 12 more weekends to gain points to acquire seeding for the Call of Duty League Championship 2020. All events after Week 4 were played online in North America due to COVID-19. Florida Mutineers and Dallas Empire won the most home series (3 each) but Atlanta FaZe won the regular season with 280 CDL points.

Only players who made an appearance are listed

Champs was plagued by DDOS attacks in the first few days which caused matches to be played off-stream hours before air time. In the end, Dallas Empire defeated Atlanta FaZe 5-1 in the Grand Final and won the first ever Call of Duty League Championship. C6 was awarded the tournament MVP.

For the first time ever, the "Pro League" and "Amateur" teams would no longer play each other in official competitions. The ecosystem was now divided between the fully professional Call of Duty League teams and the open, grassroots, path to pro circuit. Challengers events took place nearly every weekend during the season including 2000 Series events starting in November, then 1000 Series events, followed by Call of Duty League home series events and Challengers Cups throughout the remainder of the season starting in January. After events were moved online in March, all tournaments were divided into the three supported regions - North America, Europe, and Asia Pacific - with prizes allocated depending on the strength of the region. Renegades (AP), Team WaR (EU), and Triumph (NA) won the three regional finals.

After four event weekends, both the Call of Duty League and Call of Duty Challengers were moved online for the remainder of the season. The lack of control of the virus in the United States (where all teams competed from except Toronto) made it impossible to host any further offline events for the season. On July 5, the $4.6 million world championship was officially announced to take place online.